Acute bacterial meningitis is an acute purulent infection that occurs within the subarachnoid space (SAS). It is associated with a CNS inflammatory reaction that may result in decreased consciousness, seizures, raised intracranial pressure (ICP), and stroke.

When the inflammatory reaction involved the meninges, subarachnoid space, and brain parenchyma is known as meningoencephalitis.

The most common cause of acute bacterial meningitis in adult patients is Streptococcus pneumoniae.

The risk of developing Pneumococcal meningitis is increased in patients with;

Another cause is Neisseria Meningitidis
Individuals with deficiencies of any of the complement components, including properdin, are highly susceptible to meningococcal infections.

Gram-negative bacilli cause meningitis in individuals with chronic and like diabetes mellitus, liver cirrhosis, or alcoholism and chronic urinary tract infections.

Listeria monocytogenes is an increasingly important cause of meningitis in neonates, pregnant women, individuals >60 years, and immunocompromised individuals of all ages.

Staphylococcus aureus and coagulase-negative staphylococci are the most common causes of meningitis following invasive neurosurgical procedures, like shunting procedures for hydrocephalus.

The responsible microorganisms most commonly, Streptococcus pneumoniae and Neisseria meningitidis, initially colonize the nasopharynx by attaching to nasopharyngeal epithelial cells.

These bacteria invade the intravascular space by creating separations in the apical tight junctions of columnar epithelial cells. When they get into the bloodstream, they are able to avoid phagocytosis by neutrophils and classic complement-mediated bactericidal activity. This is because of the presence of a polysaccharide capsule.

When these bacteria are in circulation they can reach the intraventricular choroid plexus, directly infecting the choroid plexus epithelial cells, and gain access to the cerebrospinal fluid.

Due to the absence of effective host immune defenses in cerebrospinal fluid, these bacteria are able to multiply rapidly. Normally the cerebrospinal fluid has few white blood cells and relatively low amounts of complement proteins and immunoglobulins.

Phagocytosis or killing of these bacteria is furthermore impaired by the fluid nature of CSF, which is less conducive to phagocytosis. The invading bacteria usually initiates a series of inflammatory responses. As a result of the immune response, many of the neurologic manifestations and complications of bacterial meningitis arise.

The first step in the induction of an inflammatory response is the lysis of the bacteria releasing the cell-wall components and the formation of purulent exudate in the subarachnoid space.

Lipopolysaccharide (LPS) molecules of gram-negative bacteria and teichoic acid and peptidoglycans of Streptococcus pneumoniae are the bacterial cell wall components that induce meningeal inflammation by stimulating the production of inflammatory cytokines and chemokines. This leads to an increase in CSF protein concentration and leukocytosis.

Production of excitatory amino acids, reactive oxygen, and free oxygen radicals, nitric oxide, and peroxynitrite, and other mediators that can induce death of brain cells, in the dentate gyrus of the hippocampus.

Tumor necrosis factor-α and Interleukin-1β act increase the permeability of the blood-brain barrier, resulting in the induction of vasogenic edema and the leakage of serum proteins into the subarachnoid space. This obstructs the flow of CSF through the ventricular system and diminishes the resorptive capacity of the arachnoid granulations in the dural sinuses, leading to obstructive and communicating hydrocephalus and interstitial edema.

Narrowing of the large arteries at the base of the brain due to encroachment by the purulent exudate in the SAS and infiltration of the arterial wall by inflammatory cells with vasculitis may result in ischemia and infarction, obstruction of branches of the middle cerebral artery by thrombosis, thrombosis of the major cerebral venous sinuses, and
thrombophlebitis of the cerebral cortical veins.

The combination of interstitial, vasogenic, and cytotoxic edema leads to raised ICP and coma. Cerebral herniation
usually results from the effects of cerebral edema, either focal or generalized.

The classic clinical triad of meningitis is fever, headache, and nuchal rigidity, but it may not be present in some patients.

A decreased level of consciousness occurs in >75% of patients and can vary from lethargy to coma.

Fever and either headache, stiff neck, or an altered level of consciousness is present in nearly every patient with acute bacterial meningitis.

Nuchal rigidity (neck stiffness) is the pathognomonic sign of meningeal irritation and is present when the neck resists passive flexion.

The high prevalence of cervical spine disease in older individuals may result in false-positive tests for nuchal rigidity.

Seizures can also be present whereby focal seizures occur due to focal arterial ischemia or infarction, or focal edema.

Generalized seizure activity and status epilepticus may be due to hyponatremia or cerebral anoxia.

Raised ICP is an expected complication of bacterial meningitis and the major cause of obtundation and coma in this disease.

Signs of increased ICP include a deteriorating or reduced level of consciousness, papilledema, dilated poorly reactive pupils, sixth nerve palsies, decerebrate posturing, and the Cushing reflex. The most disastrous complication of increased ICP is cerebral herniation.

Rash of meningococcemia and Petechiae are found on the trunk and lower extremities, in the mucous membranes and conjunctiva, and occasionally on the palms and soles.

The diagnosis of bacterial meningitis is made by examination of the CSF.
The need to obtain neuroimaging studies (CT or MRI) prior to lumbar puncture (LP) requires clinical judgment.

In an immunocompetent patient with no known history of recent head trauma, a normal level of consciousness, and no evidence of papilledema or focal neurologic deficits, it is considered safe to perform LP without prior neuroimaging studies.

If lumbar puncture is delayed in order to obtain neuroimaging studies, empirical antibiotic therapy should be initiated after blood cultures are obtained.

The classic CSF abnormalities in bacterial meningitis are;

The CSF LA test has a specificity of 95–100% for S. pneumoniae and N. meningitidis, so a positive test is virtually diagnostic of bacterial meningitis caused by these organisms.

MRI is preferred over CT because of its superiority in demonstrating areas of cerebral edema and ischemia. In patients with bacterial meningitis, diffuse meningeal enhancement is often seen after the administration of gadolinium.

Petechial skin lesions, if present, should be biopsied. The rash of meningococcemia results from the dermal seeding of organisms with vascular endothelial damage and biopsy may reveal the organism on Gram’s stain.

Empirical antimicrobial therapy is initiated in patients with suspected bacterial meningitis before the results of CSF Gram’s stain and culture are known.

Due to penicillin- and cephalosporin-resistant S. pneumoniae, empirical therapy of community-acquired suspected bacterial meningitis in children and adults should include a combination of dexamethasone, a third- or fourth-generation cephalosporin, and vancomycin, plus acyclovir, because of suspecting HSV encephalitis.

Cefepime is a broad-spectrum fourth-generation cephalosporin with in vitro activity similar to that of cefotaxime or ceftriaxone against S. pneumoniae and N. meningitidis and greater activity against Enterobacter species and Pseudomonas
aeruginosa.

Ampicillin should be added to the empirical regimen for coverage of L. monocytogenes in individuals <3 months of age, those >55, or those with suspected impaired cell-mediated immunity because of chronic illness, organ transplantation, pregnancy, malignancy, or immunosuppressive therapy.

Metronidazole is added to the empirical regimen to cover gram-negative anaerobes in patients with otitis, sinusitis, or mastoiditis.

Ceftazidime or meropenem should be substituted for ceftriaxone or cefotaxime in neurosurgical patients and in neutropenic patients because ceftriaxone and cefotaxime do not provide adequate activity against CNS infection with P. aeruginosa.

A 7-day course of intravenous antibiotic therapy is adequate for uncomplicated meningococcal meningitis.

Antimicrobial therapy of pneumococcal meningitis is initiated with a cephalosporin (ceftriaxone, cefotaxime, or cefepime) and vancomycin.

All CSF isolates of S. pneumoniae should be tested for sensitivity to penicillin and the cephalosporins.

Once the results of antimicrobial susceptibility tests are known therapy can be modified accordingly.

For S. pneumoniae meningitis, an isolate of S. pneumoniae is considered to be susceptible to penicillin with a minimal inhibitory concentration (MIC) <0.06 μg/mL and to be resistant when the MIC is >0.12 μg/mL.

MICs ≥2 μg/mL are considered resistant.
For meningitis due to pneumococci, with cefotaxime or ceftriaxone MICs ≤0.5 μg/mL, treatment with cefotaxime or ceftriaxone is usually adequate. For MIC >1 μg/mL, vancomycin is the antibiotic of choice.
Rifampin can be added to vancomycin for its synergistic effect but is inadequate as monotherapy because resistance develops rapidly when it is used alone.

Failure to sterilize the CSF after 24–36 h of antibiotic therapy should be considered presumptive evidence of antibiotic resistance.

Patients with penicillin- and cephalosporin-resistant strains of S. pneumoniae who do not respond to intravenous vancomycin alone may benefit from the addition of intraventricular vancomycin.

The intraventricular route of administration is preferred over the intrathecal route because adequate concentrations of vancomycin in the cerebral ventricles are not always achieved with intrathecal administration.

Meningitis due to L. monocytogenes is treated with ampicillin for at least 3 weeks. Gentamicin is added in critically ill patients (2 mg/kg loading dose, then 7.5 mg/kg per day given every 8 h and adjusted for serum levels and renal function).

The combination of trimethoprim (10–20 mg/kg per day) and sulfamethoxazole (50–100 mg/kg per day) given every 6 h may provide an alternative in penicillin-allergic patients.

Meningitis due to susceptible strains of S. aureus or coagulase-negative staphylococci is treated with nafcillin.

Vancomycin is the drug of choice for methicillin-resistant staphylococci and for patients allergic to penicillin. In these patients, the CSF should be monitored during therapy.

If the CSF is not sterilized after 48 h of intravenous vancomycin therapy, then either intraventricular or intrathecal vancomycin, 20 mg once daily, can be added

The third-generation cephalosporins—cefotaxime, ceftriaxone, and ceftazidime—are equally efficacious for the treatment of gram-negative bacillary meningitis, with the exception of meningitis due to P. aeruginosa, which should be treated with ceftazidime or meropenem.

A 3-week course of intravenous antibiotic therapy is recommended for meningitis due to gram-negative bacilli.

The release of bacterial cell-wall components by bactericidal antibiotics leads to the production of the inflammatory cytokines IL-1β and TNF-α in the SAS.

Dexamethasone exerts its beneficial effect by inhibiting the synthesis of IL-1β and TNF-α at the level of mRNA, decreasing CSF outflow resistance, and stabilizing the blood-brain barrier.

The rationale for giving dexamethasone 20 min before antibiotic therapy is that dexamethasone inhibits the production of TNF-α by macrophages and microglia only if it is administered before these cells are activated by endotoxin.

Emergency treatment of increased ICP include elevation of the patient’s head to 30–45°, intubation, and hyperventilation (Paco2 25–30 mmHg), and mannitol.

Patients with increased ICP should be managed in an intensive care unit. 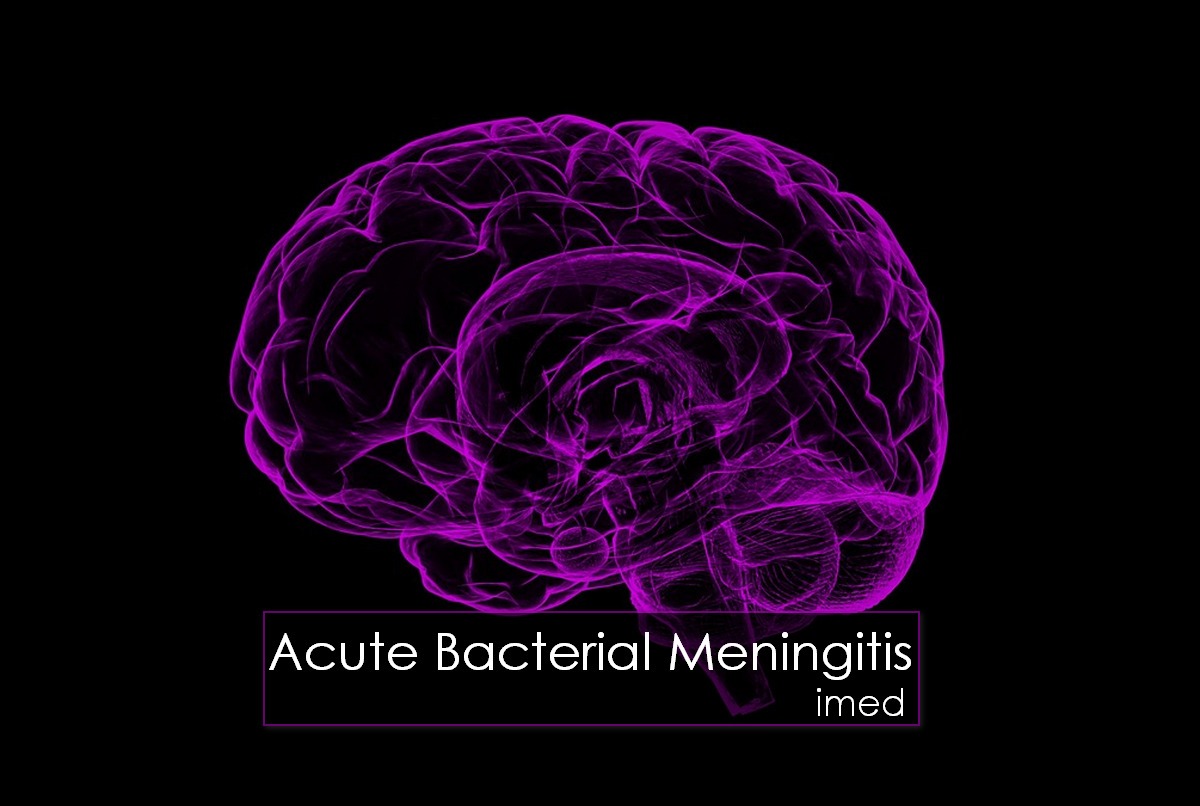