Read more about Gout in our article here

Chemically, Allopurinol is an isomer of hypoxanthine. 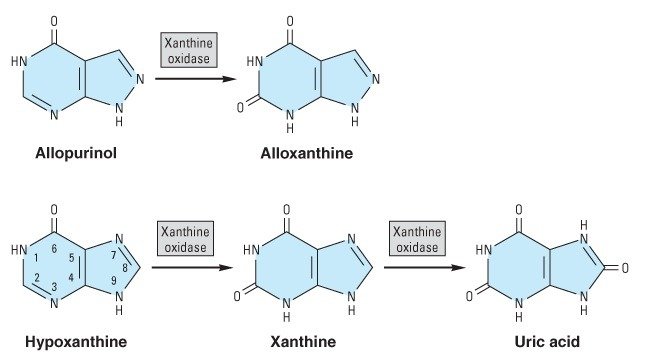 The drug is classified in pregnancy category C

The plasma uric acid concentration should be kept below 0.42 mmol/L. Allopurinol may provoke acute gout during the first few weeks of treatment. It must not be commenced until several weeks after an acute attack has completely resolved.

Mechanism of action of Allopurinol

Allopurinol is a xanthine oxidase inhibitor specifically a uricostatic agent.

This inhibition decreases the production of uric acid and reducing its concentration in extracellular fluid, thereby preventing precipitation of crystals in joints or elsewhere. In the long run, it relieves the signs and symptoms of gout.

Uric acid is mobilized from tophaceous deposits which slowly disappear.

Note that Allopurinol is not uricosuric, rather they inhibit xanthine oxidase, which is involved in the synthesis of uric acid.

Febuxostat is another drug that belongs to the same class as allopurinol but it may be more selective for xanthine oxidase.

Allopurinol is often the first urate-lowering drug used prophylactically to treat chronic, tophaceous gout because it reduces the size of the established tophi; colchicine is administered concomitantly during the first week of therapy to prevent gouty arthritis.

Apart from this agent, chronic gout is treated with the uricosuric agent probenecid or sulfinpyrazone, which increases the elimination of uric acid, or febuxostat.

Treatment of gout with allopurinol, as with uricosuric agents, is begun with the expectation that it will be continued for years if not for life.

When starting allopurinol, colchicine should also be used until steady-state serum uric acid is normalized or decreased to less than 6 mg/dL. Thereafter colchicine can be stopped, while allopurinol is continued.

Aside from gout, allopurinol is used as an antiprotozoal agent and is indicated to prevent the massive uricosuria following therapy of blood dyscrasias that could otherwise lead to renal calculi.

Amelioration of granulocyte suppression with fluorouracil; as a mouthwash to prevent fluorouracil-induced stomatitis

It is contraindicated with an allergy to allopurinol,

Avoid drinking alcohol. It can make your condition worse.

Safety in children and during pregnancy has not been established.

The drug is given orally (300–800 mg/d). Except for infrequent allergic reactions, it is well tolerated and is the drug of choice for gout prophylaxis.

At the start of therapy, gout attacks may occur, but they can be prevented by concurrent administration of colchicine (0.5–1.5 mg/d).

The initial dosage of allopurinol is 100 mg/d. It may be titrated upward until serum uric acid is below 6 mg/dL; this level is commonly achieved at 300 mg/d but is not restricted to this dose.

Colchicine or an NSAID should be given during the first weeks of allopurinol therapy to prevent gouty arthritis episodes that sometimes occur.

Prevention of acute gouty attacks: 100 mg/day PO; increase the dose by 100 mg at weekly intervals until uric acid levels are within normal limits.

Prevention of uric acid nephropathy in certain malignancies: 600–800 mg/day PO for 2–3 days; maintenance dose should then be established as above.

Recurrent calcium oxalate stones: 200–300 mg/day PO; adjust the dose up or down based on 24-hr urinary urate determinations.

Allopurinol is approximately 80% absorbed after oral administration and has a terminal serum half-life of 1-2 hours.

Encourage patient to drink 2.5 to 3 L/day to decrease the risk of renal stone development.

The drug is dialyzable by both hemodialysis and peritoneal dialysis.

Dietary purines are not an important source of uric acid. Quantitatively important amounts of purine are formed from amino acids, formate, and carbon dioxide in the body.

Those purine ribonucleotides not incorporated into nucleic acids and derived from nucleic acid degradation are converted to xanthine or hypoxanthine and oxidized to uric acid.

Allopurinol inhibits this last step, resulting in a fall in the plasma urate level and a decrease in the size of the urate pool. The more soluble xanthine and hypoxanthine are increased.

Dissolve contents of each vial with 25 ml of sterile water for injection. Further, dilute with NSS or D5W to a final concentration of < 6 mg/ml. Administer within 10 hr of reconstitution.

Administer as a continuous infusion or infused q 6, 8, or 12 hr with rate dependent on the volume used.

There is an increased risk of hypersensitivity reaction with ACE inhibitors.

Increased risk of rash with ampicillin

The increased half-life of oral anticoagulants. ( Metabolism of warfarin is inhibited)

Increased risk of toxic effects with thiopurines, 6-MP (azathioprine dose and the dose of 6-MP should be reduced to one-third to one-fourth the usual dose)

When chemotherapeutic mercaptopurines (eg, azathioprine) are given concomitantly with allopurinol, their dosage must be reduced by about 75%.

Allopurinol may also increase the effect of cyclophosphamide.

Allopurinol inhibits the metabolism of probenecid and oral anticoagulants and may increase hepatic iron concentration.

Do You Have Questions ?

We'll help you to grow your career and growth.
Contact Us Today