In heart failure, the heart can no longer meet the metabolic demands of the body tissues at normal physiologic venous pressures. Elevation of pulmonary or systemic venous pressures by the heart may result in organ congestion. This can result from systolic or diastolic dysfunction or both.

As it evolves, the compensatory mechanism takes over throughout the body. This involves changes in vascular function, blood volume, and neurohumoral status. All these mechanisms try to maintain cardiac output and arterial blood pressure. However, these compensatory changes over time can worsen cardiac function.

Cardiac changes during heart failure include

What are these compensatory mechanisms during heart failure?

Congestive heart failure is commonly categorized by whether the abnormality is due to contraction(systole) or relaxation (diastole) of the heart. Let's start with systolic dysfunction.

In systolic dysfunction, the ventricle contracts poorly because of loss of contractile strength of the myocardium and empties inadequately due to ventricular dilatation. This leads to increased diastolic volume and pressure and decreased ejection fraction (EF).

This type is also accompanied by a decrease in normal ventricular emptying (usually ejection fraction <45%). Examples of systolic HF include ischemic cardiomyopathy and dilated cardiomyopathy.

Heart failure with preserved ejection fraction also known as diastolic dysfunction or HF with preserved EF occurs when the filling of one or both ventricles is impaired while the emptying capacity is normal.

Diastolic dysfunction is common among the elderly probably due to myocyte loss and increased interstitial collagen deposition.

Typical examples include hypertensive heart disease and the infiltrative cardiomyopathies.

When pulmonary capillary pressure exceeds the oncotic pressure of plasma proteins, fluid leaks out from the capillaries into the interstitial space and alveoli. This reduces pulmonary compliance and increases the work of breathing. Lymphatic drainage increases but cannot compensate for the increase in pulmonary fluid.

The kidneys retain salt and water, worsening the EVC expansion. When the rate of fluid accumulation exceeds the rate of absorption by the lymphatics pulmonary edema ensues. It is characterized by audible crackles on auscultation, increased jugular venous pressure and edema on examination, a chest x-ray can also show features of pulmonary edema.

Decompensated HF denotes the worsening of symptoms and clinical findings in pre-existing HF. This can be due to precipitating factors such as non-adherence to medication, an increase in dietary salt, acute ischemia, tachycardia, or pulmonary infection.

CHF manifests for the first time when a precipitating factor places an additional burden on the heart. These factors include:

Symptoms of heart failure usually differ depending on the ventricle affected. They include dyspnea suggesting pulmonary congestion, orthopnea as heart failure advances, paroxysmal nocturnal dyspnea, and fatigue/weakness due to low CO.

Dyspnea usually occurs during exertion and is relieved by rest. In severe cases, it can occur at night causing nocturnal cough.

In paroxysmal nocturnal dyspnea, dyspnea awakens patients several hours after they lie down and is relieved only after they sit up for 15 to 20 min. It is associated with pulmonary congestion and Cheyne-Stokes respiration with low cardiac output.

In right ventricular failure, the most common symptoms are ankle swelling and fatigue. Sometimes patients feel a sensation of fullness in the abdomen or neck. Right upper quadrant abdominal discomfort due to hepatic congestion, and stomach and intestinal congestion can cause anorexia and abdominal bloating.

On examination, you may realize features of the precipitating factors such as anemia, hemochromatosis, hyperthyroidism, etc..

Tachycardia and tachypnea may be present in LV failure. Patients with severe LV failure may be visibly dyspneic or cyanotic, hypotensive, and confused or agitated because of hypoxia and poor cerebral perfusion.

The severity of heart failure is commonly classified by using an HF staging system. 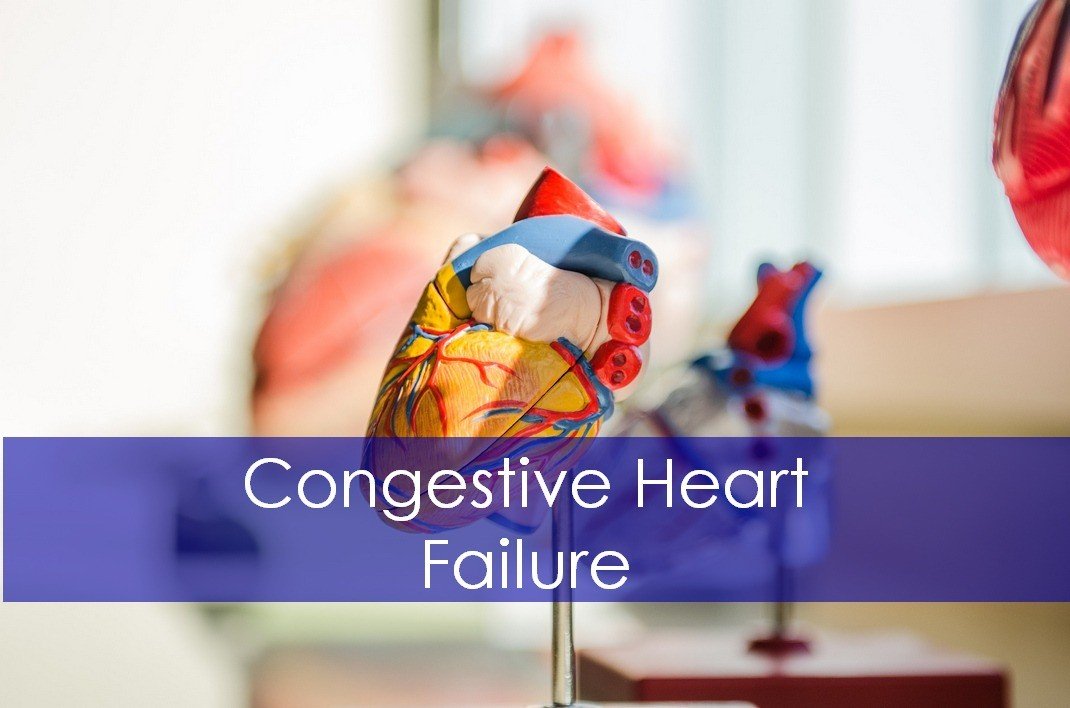