Drugs Used In HIV Treatment (HAART) and Their Interactions

Since the introduction of zidovudine in 1987, there have been substantial advances made in drugs used in HIV treatment.

In addition, greater knowledge of viral dynamics through the use of viral load and resistance testing has made clear that combination therapy with maximally efficacious and potent agents will reduce viral replication to the lowest possible level and decrease the likelihood of the emergence of resistance.

Thus, administration of highly active antiretroviral therapy (HAART), typically comprising a combination of 3 or 4 antiretroviral agents, has become the standard of care.

Viral susceptibility to specific agents varies among patients and may change with time, owing to the development of resistance. Therefore, such combinations must be chosen with care and tailored to the individual, as must changes to a given regimen.

In addition to potency and susceptibility, important factors in the selection of agents for any given patient are tolerability, convenience, and optimization of adherence.

There are four classes of Drugs Used In HIV Treatment available:

As new agents have become available, several older ones have had diminished usage, because of either suboptimal safety profile or inferior antiviral potency.

Importance of Pharmacokinetic Knowledge of Drugs Used In HIV Treatment

Concurrent use of many medications is necessary for most HIV-infected patients. These medications include combinations of antiretroviral agents, prophylaxis or treatment for opportunistic infections, antiemetics, neuropsychiatric drugs, and opioid pain medications. Such extreme polypharmacy necessitates awareness of pharmacokinetic and pharmacodynamic interactions.

Perhaps the most important of the pharmacokinetic complications result from the metabolism of the NNRTI and PI agents by the CYP450 enzyme system, primarily the 3A4 isoform. Because many are inducers or inhibitors of CYP3A4 as well as substrates, drug-drug interactions may have marked clinical ramifications.

However, variable effects on different CYP450 isoforms may make interactions somewhat unpredictable. For example, in the treatment of tuberculosis, the use of rifampin, a standard antimycobacterial agent but also one of the most potent 3A4 inducers, may either decrease efficacy (eg, atazanavir, lopinavir) or increase toxicity (eg, saquinavir) of concurrent antiretroviral agents, owing to the alteration of serum levels.

Increased levels of rifabutin (associated with uveitis) or trazodone (causing hypotension, syncope), when co-administered with ritonavir, may markedly increase toxicity. Increased levels of clarithromycin used for treatment or prophylaxis of Mycobacterium avium infection or as an antibacterial agent, when co-administered with indinavir, ritonavir, and atazanavir, may increase the potential for QT interval prolongation.

Conversely, decreased levels of clarithromycin with efavirenz may reduce antibacterial efficacy. Most recently, these types of interactions have been used to advantage in the form of dual protease inhibitor regimens (boosted regimens), based on resultant increased plasma concentrations of the substrate (eg, lopinavir, saquinavir) when co-administered with an inducer (most often ritonavir). Improved drug exposure, increased antiviral potency, more convenient dosing, and improved tolerability result, thus improving patient adherence.

The NRTIs act by competitive inhibition of HIV-1 reverse transcriptase and can also be incorporated into the growing viral DNA chain to cause termination. Each requires intracytoplasmic activation via phosphorylation by cellular enzymes to the triphosphate form. Most of the NRTIs have activity against HIV-2 as well as HIV-1.

Nucleoside analogs may be associated with mitochondrial toxicity, probably owing to the inhibition of mitochondrial DNA polymerase gamma, and they can increase the risk of lactic acidosis with hepatic steatosis, which may be fatal, as well as disorders of lipid metabolism. NRTI treatment should be suspended in the setting of rapidly rising aminotransferase levels, progressive hepatomegaly, or metabolic acidosis of unknown cause.

Abacavir is a guanosine analog that is well absorbed following oral administration (83%) and unaffected by food. The elimination half-life is 1.5 hours, and the intracellular half-life ranges from 12 to 26 hours. Cerebrospinal fluid levels are approximately one third those of plasma.

Hypersensitivity reactions, occasionally fatal, have been reported in approximately 5% of patients receiving abacavir.
Symptoms, which generally occur within the first 6 weeks of therapy, include fever, malaise, nausea, vomiting, diarrhea, and anorexia. Respiratory symptoms such as dyspnea, pharyngitis, and cough may also be present, and skin rash occurs in about 50% of patients.

Laboratory abnormalities such as mildly elevated serum aminotransferase or creatine kinase levels may be present but are not specific for the hypersensitivity reaction. Although the syndrome tends to resolve quickly with discontinuation of medication, rechallenge with abacavir results in return of symptoms within hours and may be fatal.

Didanosine (ddI) is a synthetic analog of deoxyadenosine. Oral bioavailability is 30 to 40%; dosing on an empty stomach is required. Cerebrospinal fluid concentrations of the drug are approximately 20% of serum concentrations. The elimination half-life is 1.5 hours, but the intracellular half-life of the activated compound is as long as 2024 hours.

Buffered powder for oral solution and chewable tablets are taken twice daily; enteric-coated capsules can be taken once daily because of greater bioavailability.

The buffer in the tablets and powder interferes with the absorption of indinavir, delavirdine, dapsone, and itraconazole; therefore, concurrent administration is to be avoided. Because the tablets contain both phenylalanine (36.5 mg) and sodium (1380 mg), caution should be exercised in patients with phenylketonuria and those on sodium-restricted diets.

The major clinical toxicity associated with didanosine therapy is dose-dependent pancreatitis. Other risk factors for pancreatitis (eg, alcoholism, hypertriglyceridemia) are relative contraindications to administration of didanosine, and other drugs with the potential to cause pancreatitis, including zalcitabine and stavudine, should be avoided.

Fluoroquinolones and tetracyclines should be administered at least 2 hours before or after didanosine to avoid decreased antibiotic plasma concentrations due to chelation. Serum levels of didanosine are increased when co-administered with tenofovir and ganciclovir, thus increasing the risk of toxicity; they are decreased by atazanavir, delavirdine, ritonavir, tipranavir, and methadone.

Emtricitabine (formerly called FTC) is a fluorinated analog of lamivudine with a long intracellular half-life (> 39 hours), allowing for once-daily dosing. The oral bioavailability of the capsules is 93% and is unaffected by food, but penetration into the cerebrospinal fluid is low.

The oral solution, which contains propylene glycol, is contraindicated in young children, pregnant women, patients with renal or hepatic failure, and those using metronidazole or disulfiram.

Also, because of it's in vitro activity against HBV, patients co-infected with HIV and HBV should be closely monitored if treatment with emtricitabine is interrupted or discontinued, owing to the likelihood of hepatitis flares.

Because of their similar mechanisms of action and resistance profiles, the combination of lamivudine and emtricitabine is not recommended.

The most common adverse effects observed in patients receiving emtricitabine are headache, diarrhea, nausea, and asthenia. In addition, hyperpigmentation of the palms and/or soles may be observed (~ 3%), particularly in blacks (up to 13%). 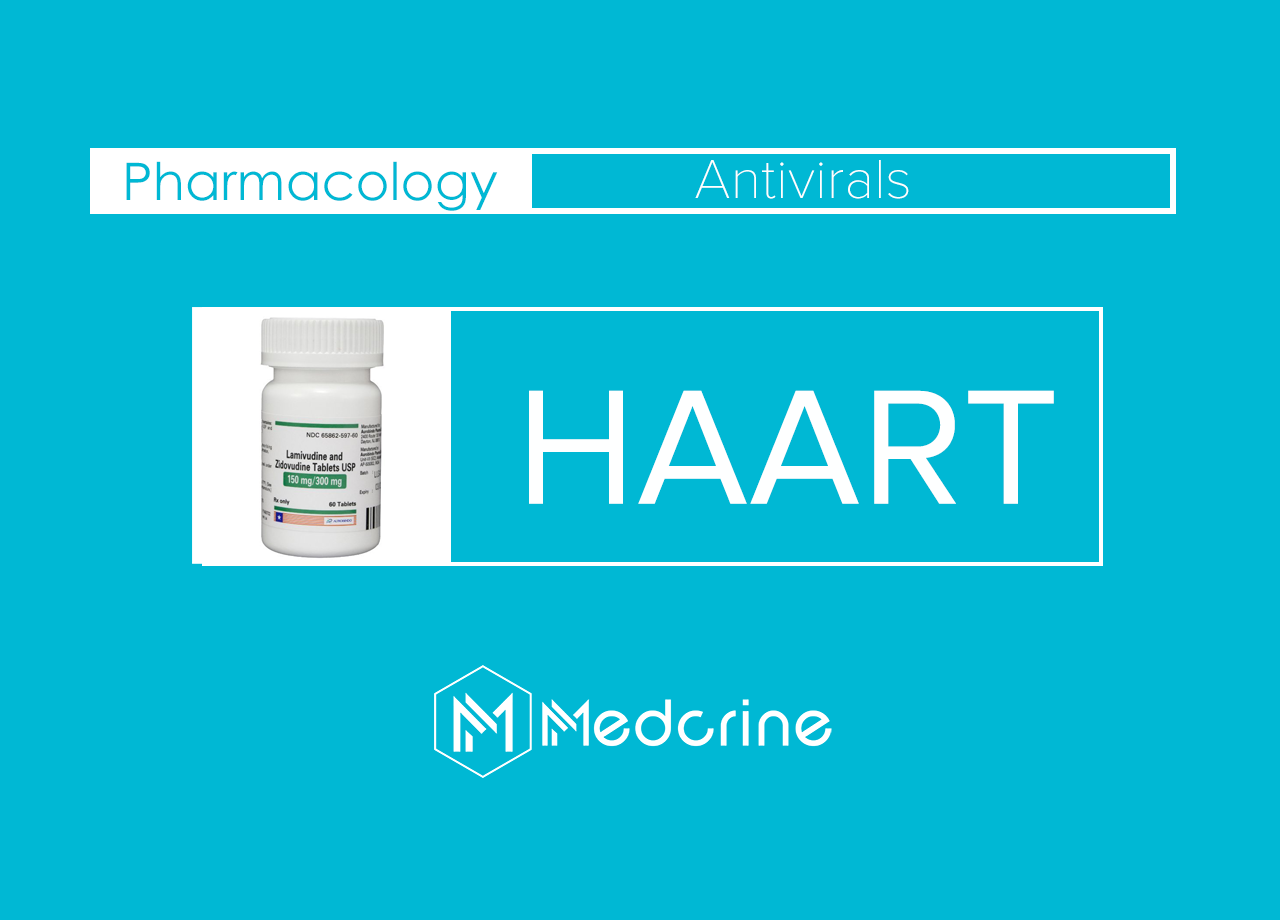