The glomerular filtration rate is the rate at which filtrate flows out of the glomerular capillary loop, across the basement membrane, into the tubule. In other words, it is the sum of the ultrafiltration rates from plasma into the Bowman’s space in each nephron and a measure of renal excretory function.

Since the GFR is a rate, its units are volume per unit time (mL/min or L/day). It describes how quickly the body is filtering out fluid, therefore, giving an estimation of how efficiently the kidneys can excrete waste.

It is proportionate to body size and the reference value is usually expressed after correction for body surface area as 120±25 mL/min/1.73 m2.

An impaired GFR can result in the accumulation of all types of substances and has the potential to disrupt many of the body’s homeostatic mechanisms.

The glomerular filtration rate may be measured directly by injecting and measuring the clearance of compounds such as inulin or radiolabelled ethylenediamine-tetra-acetic acid (EDTA), which are completely filtered at the glomerulus and are not secreted or reabsorbed by the renal tubules or indirectly.

What are the determinants of glomerular filtration rate?

There are two main determinants of glomerular filtration rate that we shall cover.

Large particles more than 5000 Daltons and/or negatively charged are not able to cross the capillary loop whereas small particles such as sodium, potassium, creatinine, urea, glucose, and, water, pass freely.

The pressure gradient between the capillary lumen and the urinary space is the predominant factor determining GFR given the capillary’s high permeability for smaller particles.

This gradient consists of the balance between hydrostatic and oncotic pressures.

To understand GFR better let's look at the following formula:

Lp is the unit for the permeability of the capillary wall

S is the surface area available for filtration.

The reason for this is that they composed of thin endothelial cells without a muscular layer, connecting an afferent and an efferent arteriole, both of which have supporting muscular layers.

The ability of the afferent and the efferent arterioles to modulate pressure within the capillary loop, and the intrinsic low resistance within the vast capillary plexus, combine to maintain a relatively constant and robust hydrostatic pressure.

On average, the typical hydrostatic pressure within a glomerular capillary loop is approximately 45 mm Hg. Higher than other capillaries of the body.

The high hydrostatic pressure within the capillary loop is a strong force that favors filtration. In contrast, the urinary space, on the other side of the glomerular capillary wall, has very low pressure, often in the range of 10 mm Hg. Thus, there is a high gradient favoring filtration from plasma to urinary space.

On an average, approximately 120 mL/min or nearly 180 L/day of fluid cross the capillary.

Compare this to the typical renal plasma flow of 625 mL/min; about 20% of the fluid that is delivered to the kidney is filtered across the glomerulus into the urinary space.

The relationship of glomerular filtration rate to renal plasma flow is known as filtration fraction.

Approximately 20% of renal plasma flow is filtered out of the capillary in the glomerulus.

Despite the high hydrostatic pressures, plasma proteins, particularly albumin, are not filtered due to their large size and negative charge.

In addition, cells are not filtered. The combination of filtration of a high percentage of plasma and retention of serum proteins and cells within the capillary leads to an increasingly concentrated capillary fluid; consequently, there is a strong oncotic force favoring reabsorption of fluid toward the terminal end of the capillary.

The increasing inward force of the plasma protein ultimately rises to the level of the outward hydrostatic force described above. Equilibrium is reached, and further filtration ceases. This point is termed filtration equilibrium.

The inward oncotic pressure increases dramatically over the length of the capillary due to the large amount of fluid that is filtered and to the inability of large molecules to cross the capillary membrane.

Inulin is the classic substance used to measure GFR because it is freely filtered and not affected by the tubules. However, urea and creatinine are used more often clinically.

They are both freely filtered, and although they are slightly modulated by the tubules, the changes in the quantities of these substances are small.

Particles such as creatinine and urea, however, partially meet the criteria to be used here. Both are freely filtered across the glomerulus and are not modified significantly by the tubule under normal conditions. Thus, the clearance of these particles can be used to measure the GFR.

By the fact that creatinine is freely filtered, the excreted amount is equal to the GFR multiplied by the serum concentration.

Minor tubular secretion of creatinine causes CrCl to exaggerate GFR when renal function is Poor; can be affected by drugs (e.g. trimethoprim, cimetidine)

To measure an individual’s GFR, a 24-hr urine collection is required (inconvenient and often unreliable). By collecting all the urine over a 24-hr period, one can calculate the amount of filtered creatinine or urea per day.

The most widely used is the Modification of Diet in Renal Disease (MDRD) equation.

In particular, the MDRD formula is based on the serum creatinine value and so is heavily influenced by muscle mass; eGFR may, therefore, be misleading in individuals whose muscle bulk is outside the normal range for their sex and age.

If this is not true (i.e., more creatinine is being produced than eliminated), the plasma creatinine will be rising throughout the day.

If you are going to use this equation in non–steady-state conditions, you must make the collection of the urine during a very short period of time (e.g., minutes rather than a day) to ensure that the plasma creatinine accurately reflects the concentration at the time of the urine collection.

Measurement of other endogenous metabolites, such as cystatin C, may provide a more accurate estimate of GFR in this setting.

Having discussed how the balance of hydrostatic and oncotic forces determines the glomerular filtration rate. In most scenarios, serum protein levels do not fluctuate; thus, the body does not regulate filtration by altering the oncotic pressure of the blood that enters the capillary loop.

Instead, we alter the hydrostatic pressure as the major method of regulating glomerular filtration rate.

The kidney has two major types of hydrostatic regulation, Intrinsic and extrinsic.

Without these regulatory mechanisms, the glomerular hydrostatic pressure would be fully and wholly dependent on systemic blood pressure; falling blood pressures would automatically lead to a decrement of the GFR.

The kidney, however, has a remarkable ability to maintain its glomerular hydrostatic pressure despite wide fluctuations of systemic blood pressure.

Flow is determined by both the driving pressure (the difference between the pressures at each end of the tube) and the resistance within the tube:

Thus, if the driving pressure and the resistance are reduced in proportion, the flow will not be affected. This ability of a vessel to modify its own resistance in response to changes of pressure is termed autoregulation.

Blood vessels have a baseline “tone,” which is affected by a multitude of factors, including the intrinsic pliability of the vessel wall, the activity of the sympathetic nervous system, and a host of neurohumoral mediators, including epinephrine, angiotensin, and vasopressin.

In addition, however, some vessels have an intrinsic ability to respond to changes in pressure. This is termed the myogenic stretch.

The term myogenic refers to the fact that muscle cells (i.e., myocytes) around the artery are able to induce their own contraction (or relaxation), without depending on an external stimulus such as electrical activity from a nerve or biochemical activation from a hormone.

In kidneys, afferent arterioles respond to changes in pressure by either constricting or dilating. Specifically, in the setting of decreased perfusion pressure, the muscles of the afferent arterioles relax, which reduces tension within the vessel wall and increases the radius of the vessel, which decreases the resistance, thereby maintaining the flow.

Conversely, in the settings of increased perfusion pressure, the muscles of the afferent arterioles will contract, leading to a decreased radius of the vessel and increased resistance, thereby preventing the systemic pressure from inducing a large change in the GFR.

Renal blood flow is typically maintained in young healthy individuals as the systemic systolic pressure falls to about 90 mm Hg. Further reductions in pressure are associated with a decrement in renal blood flow.

In individuals who have lost the ability to modulate the vasoactivity of the afferent and the efferent arterioles, however, renal perfusion may fall at much higher (or less severe drops in) systolic blood pressure.

The benefits of the myogenic stretch response are relatively limited with respect to persistent changes in systemic blood pressure.

Although this response is important in preventing changes in GFR associated with the frequent transient fluctuations in blood pressure that are common throughout the day, it probably does not play an important role in responding to more sustained blood pressure alterations.

These mechanisms are likely more important in maintaining the GFR under conditions in which the blood pressure changes are more persistent, e.g., clinical conditions such as congestive heart failure or volume depletion from blood loss.

Decreasing systemic blood pressure will lead to afferent arteriole vasodilatation via autoregulation in an attempt to preserve renal blood flow.

In addition, the decrement of blood pressure stimulates vascular receptors, which results in stimulation of the sympathetic system and release of epinephrine and norepinephrine.

In addition, the juxtaglomerular apparatus (JGA) has an important role in regulating the GFR. In the setting of either a decrease in afferent arteriole pressure (as may happen with systemic hypotension) or in response to a decrease in tubular flow, the JGA secretes renin.

Upon its release, renin stimulates the formation of angiotensin I, which is converted to the biologically active angiotensin II by angiotensin-converting enzyme.

One of angiotensin II’s major effects is to stimulate the production of aldosterone, a hormone that plays a major role in regulating sodium in the body. In addition, angiotensin II has important vasoconstrictive effects systemically as well as on the kidney.

Preferential efferent arteriole vasoconstriction leads to an increase of intraglomerular hydrostatic pressure and is one of the most important mechanisms for maintaining the GFR despite changes in systemic blood pressure.

In addition, prostaglandins are released, which cause afferent arteriole dilation, and further protect the GFR.

Decreased renal perfusion pressure is one of the factors that stimulate renin release. For instance, if a decrement in systemic blood pressure is sustained, thereby overwhelming the ability of myogenic autoregulation to maintain capillary pressure, a transient decrease in glomerular hydrostatic pressure and, hence, GFR will occur.

With less fluid filtered in the glomerulus, the volume of fluid moving through the tubule will also diminish. The subsequent decrease in tubular flow, as perceived by the macula densa, stimulates the juxtaglomerular release of renin.

Renin, leading to the formation of angiotensin II, leads to preferential efferent vasoconstriction, which re-establishes glomerular hydrostatic pressure and brings the GFR back toward normal despite the change in systemic blood pressure.

Whereas vasodilatation of the afferent arteriole maintains renal blood flow in the setting of hypotension or decreased cardiac output, the unique placement of the efferent arteriole makes it a more important protector of the GFR.

Efferent constriction acts by creating the equivalence of a “bottleneck” obstruction; the outflow tract is narrowed, flow decreases, and pressure rises. In the kidney, the result is that glomerular pressure is maintained despite falling renal perfusion pressure. 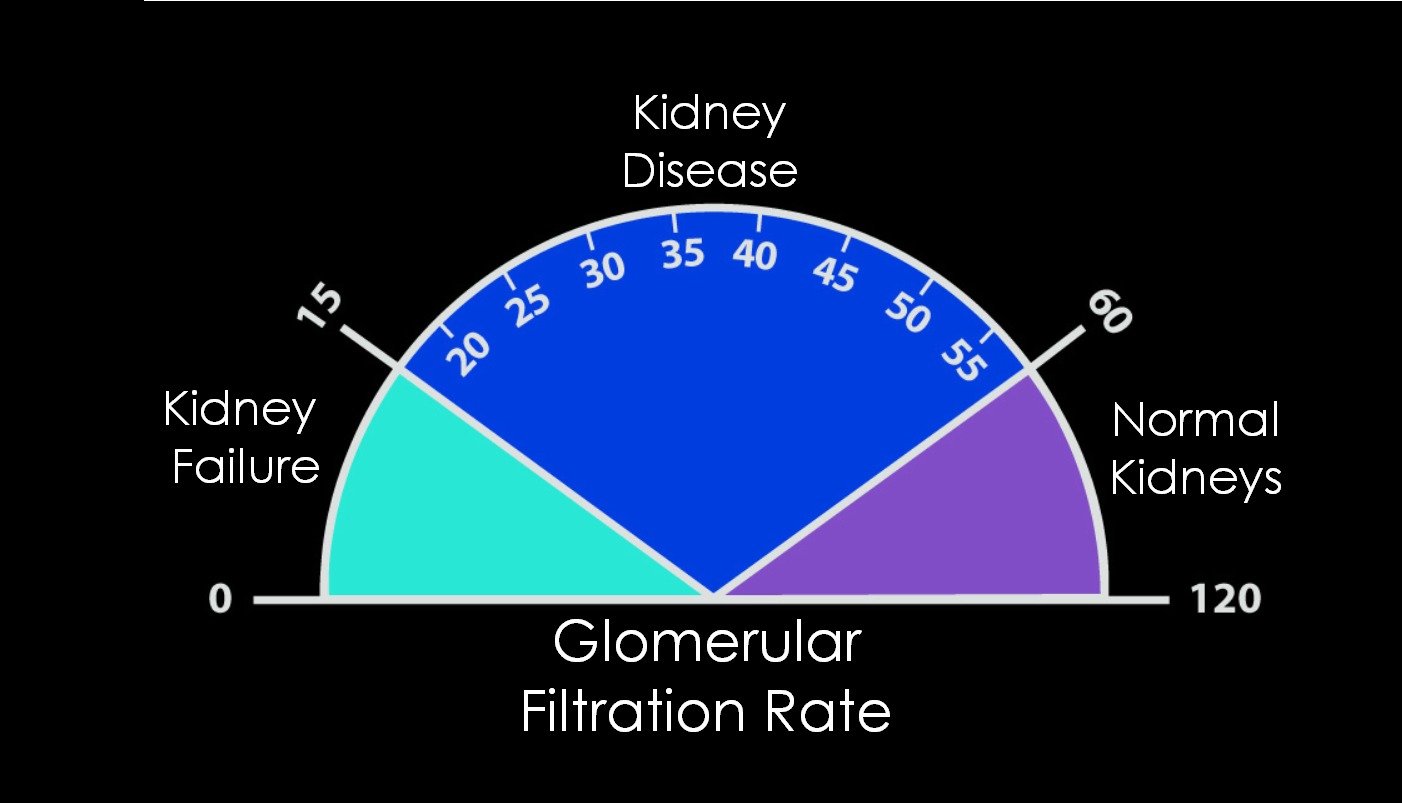