Events in the cardiac cycle generate sounds that can be heard on the surface of the chest wall.

The first heart sounds (S1) occur with the closure of the atrioventricular valves (mitral and tricuspid valves) and thus it signals the beginning of systole. The mitral component of the first heart sound (M1) Slightly precedes the tricuspid component (T1), but you usually hear the two components fused as one heart sound. You can hear S1 over all the precordium but its usually loudest at the apex.

Its intensity is increased in mitral stenosis due to an increased left atrial pressure and decreases in low cardiac output conditions.

The second heart sound (S2) occurs with the closure of the semilunar valves (aortic and pulmonary valves) and signals the end of systole. The aortic component of the second sound (A2) Slightly precedes the pulmonic component (P2). Although it is heard over the precordium, S2 is loudest at the base (left sternal edge).

When compared with the first heart sound, S2 is shorter, softer and is slightly higher pitched.

The pulmonary component of S2 is known as P2, whereas the aortic component is called A2. The splitting is best heard in the second left intercostal space and the left sternal edge. During inspiration, there is a delay in the closing of the pulmonary valves by about 30 to 60 milliseconds. This occurs because of an increased venous return and decreases pulmonary vascular resistance. Since this phenomenon is a normal occurrence it is known as a physiological splitting of S2.

There may be a persistent or a widened splitting of S2 due to delayed right ventricular emptying, in diseases like pulmonary stenosis, right bundle branch block (RBBB), mitral regurgitation, and ventricular septal defect.

The splitting is fixed in Atrial septal defect (ASD).

Effect of respiration on heart sounds

The volume of the right and the left ventricular systole is just about equal, but this can be affected by respiration. To learn this we have a phrase for you.

moRe to the Right heart, Less to the Left.

This phrase means that during inspiration the intrathoracic pressure is decreased. This decrease in pressure pushes more blood into the vena cava, increasing venous return to the right side of the heart which then increases the stroke volume of the right ventricle and delays the closure of the pulmonary valves.

The decreased volume shortens the left ventricular systole allowing the aortic valve to close a bit earlier than the pulmonic valve. These are heard as two separate components known as split S2.

Extra heart sounds are the sounds other than the normal S1 and S2. These are the third and fourth heart sounds.

In normal circumstances, diastole is a silent event. However, in some conditions ventricular filling causes some vibrations to be heard over the chest wall. These vibrations are the S3.

The third heart sound (S3) is a mid-diastolic, low-pitched sound. With the presence of S3, the heart sounds are described as having a gallop rhythm.

The S3 occurs when the ventricles are resistant to filling during the early filling phase(early diastole) which is known as the (protodiastole). This occurs immediately after S2 when the atrioventricular valves open and the blood first pours into the ventricles.

It may be normal at times as physiological S3 particularly in children. When present S4 coincides with atrial contraction but its usually abnormal. A physiological S3 is produced when there is rapid filling during diastole.

On the other hand, a pathological S3 is produced when there is decreased compliance of the ventricle causing a filling sound
S2 requires a very compliant left ventricle.

It can be a sign of systolic congestive heart failure.

This sound S4 occurs at the end of the diastole (late diastole), at presystole, when the ventricles are resistant to filling.

The atria contracts and pushes blood into the non-compliant ventricle creating vibrations known as the S4. This sound is heard just before S1.

This sound is always abnormal.

It occurs during active left ventricular filling and requires a non-compliant left ventricle to be heard.

This can be a sign of diastolic congestive heart failure.  Reduced left ventricular compliance, as in aortic stenosis, mitral regurgitation, hypertension, angina, myocardial infarction, and old age, can produce an S4.

OS- opening snap is heard when there is an opening of the stenotic mitral valve.

Note that there is a possibility for a third and fourth heart sounds to co-exist. This is known as a quadruple rhythm indicating a significantly impaired ventricular function. If S3 and S4 are superimposed when tachycardia is present, it produced a summation gallop

When blood is circulating through your vessels and the normal heart it makes no sound at all. However, some conditions create a turbulent blood flow and collision currents. These results in a murmur. The murmurs are heard like a pile of stones or a sharp turn in a stream that creates a noisy flow.

A murmur is a gentle, blowing, swooshing sound that can be heard on the chest wall.

A heart murmur is a sound that is produced as a result of turbulent blood flow through a heart valve.  The conditions which increase blood velocity cause a (flow murmur).. such conditions are exercise and thyrotoxicosis.

These murmurs are classified into two groups: Physiological or benign murmurs and pathologic heart murmurs.

A physiological murmur is heard when there is increased turbulence of blood flow across a normal valve, as can happen in the conditions thyrotoxicosis and anemia, as well as during fever and exercise. This is always systolic murmurs, because of increased blood flow during ventricular systole.

Physiologic murmurs are heard when auscultating young people. This kind of benign murmurs can be described to be systolic, soft, short, early peaking, and localized at the base of the heart. In these young people, the rest of the cardiovascular exam being normal

Murmurs can be systolic of diastolic.

Systolic murmurs occur during the systole of the ventricles, which is the period between S1 and S2. They include;

Midsystolic ejection murmurs. A mid ejection murmur has the highest intensity in the middle of systole. It is described to have a crescendo-decrescendo quality. This can be a physiological caused by increased flow through a normal valve. Or it can be pathological in conditions such as aortic stenosis or pulmonary stenosis.

A late systolic murmur occurs when there is a gap between hearing S1 and the murmur caused by mitral regurgitation.

A pansystolic murmur extends from S1 to S2. The pitch and loudness stay the same during systole. This murmur is indicative of mitral or tricuspid regurgitation and ventricular septal defect.

An early diastolic murmur is the one that starts with S2 and is a decreasing murmur, loudest at its commencement and of a  high-pitched sound. This occurs due to aortic regurgitation or pulmonary regurgitation.

A mid-diastolic murmur occurs in the later phases of diastole. It has a lower pitch and can be caused by mitral or tricuspid stenosis or atrial myxoma.

Continuous murmurs occur during both systole and diastole without a pause. The created by unidirectional flow due to a communication between a high-pressure and a low-pressure source.

A continuous flow results from the constant pressure gradient. Continuous murmurs are heard when one has a patent ductus arteriosus and arteriovenous fistula.

Conditions that cause murmurs include:

The conditions which increase blood velocity cause a (flow murmur).. such conditions are exercise and thyrotoxicosis.

Anemia causes murmurs due to a decrease in blood viscosity.

Structural defects of the valves such as a narrowed valve, incompetent valve or unusual openings occur in the chambers like in a dilated chamber or wall defects.

Stenosis is an abnormal narrowing of a vessel. A stenosis murmurs only occur when the valve is trying to open.

When there is an incompetent heart valve there can be an abnormal backward ow of blood from a high-pressure chamber to a low-pressure chamber. This is known as regurgitation.

Heart sounds are described by : 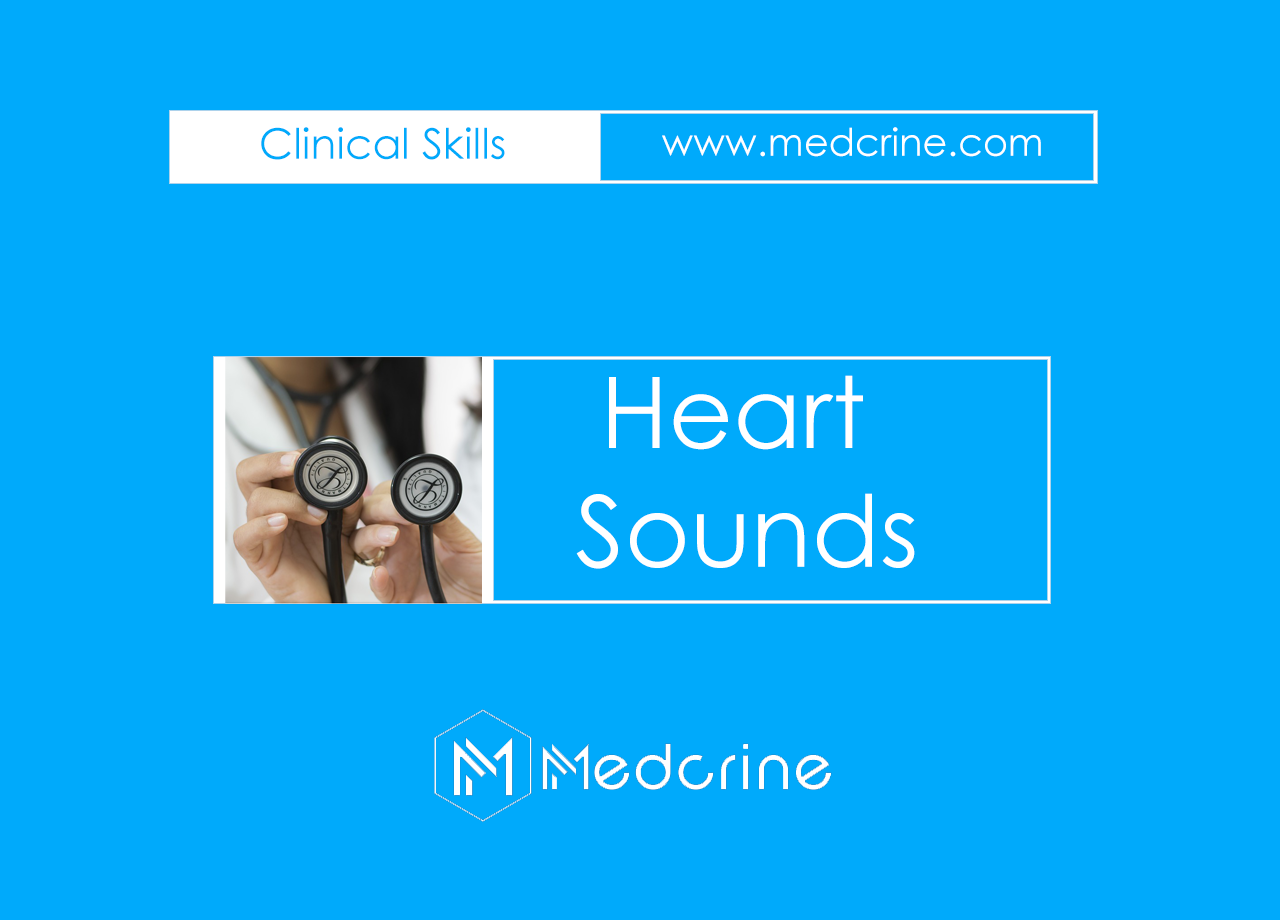