Montelukast and Zafirlukast are leukotriene D4 receptors antagonists that are used prophylactically for the management of asthma, antigen, exercise, or drug-induced asthma.

Montelukast is used as add-on therapy in adults and children (6 years and over) with mild to moderate persistent asthma which is inadequately controlled by inhaled corticosteroids and 'as needed' short-acting ß-agonists.

It is also used for the prophylaxis of asthma in which the predominant component is exercise-induced bronchoconstriction.

Zafirlukast has recently been introduced for the treatment of asthma" in adults and children (over 12 years of age).

They are generated by 5-Lipoxygenase and converts arachidonic into 5-HPETE, which in turn is converted into LTB4 which is a potent mediator of inflammation and Cysteinyl-LTs (LTC4, LTD4, LTE4 that mediate asthmatic responses.

LTB4 is a potent pro-inflammatory chemo-attractant.

LTC4 is activated to an active metabolite (LTD4) by the removal of the terminal amino acid in the peptide side-chain.

Removal of a second amino acid results in a less active metabolite known as LTE4. LTC4, LTD4 and LTE4, the ‘cysteinyl leukotrienes’, account for ‘slow-reacting substance of anaphylaxis’ (SRS-A).

These active metabolites all bind to the Cysteinyl Leukotriene Receptor 1 to cause bronchoconstriction, increase in vascular permeability producing edema and chemoattraction of eosinophil.

Leukotriene B4 is a powerful chemo-attractant and increases vascular permeability producing mucosal edema.

These medications are effective as oral maintenance therapy in chronic persistent asthma.

Montelukast has anti-inflammatory properties and is a mild, slow-onset bronchodilator.

They are mediated by a shared receptor for LTC4, LTD4, and LTE4.

They cause a longer contraction of bronchial muscles when compared to histamine.

Cyst LTs are found in the sputum of chronic bronchitis, asthmatic lung; lavage of allergic rhinitis.

Montelukast is effective in aspirin-sensitive asthma that is associated with a diversion of arachidonic acid from the cyclooxygenase pathway to the formation of leukotriene via lipoxygenase. This diversion results from the blockage by aspirin.

This drug is rapidly absorbed from the gastrointestinal tract.

The drug is 60-70% metabolized in the liver by cytochrome 3A and 2C9 and is mainly excreted in the bile.

When Montelukast is administered, it binds the cysteine leukotriene 1 receptor.

Bioavailability is greater than 90%.

Zafirlukast and Montelukast are administered orally, 1–2 times per day usually in the evening.

For allergic rhinitis, the dose is 10mg orally once daily

In children between 12 to 24 months, the dose is mg granules once daily

Asthma the dose is 20 mg orally twice daily at least one hour before or two hours after meals in adults.

Antagonizes receptors for Cysteinyl leukotriene, produced by arachidonic acid metabolism and released from mast cells, eosinophil, and other cells.

Montelukast exerts its effect by blocking these effects.

Zafirlukast has drug interaction with warfarin sodium, leading to increased prothrombin time, thus dose has to be monitored.

Increase in theophylline levels, which is itself bronchodilator

Montelukast and Zafirlukast are generally well-tolerated, but side effects include:

Inflammation at the site in lungs

Churg-Strauss Syndrome due to drugs but due to preexisting underlying disease, eosinophilia and vasculitis are seen.

Adverse effects of Zafirlukast include headache and elevation in liver enzymes: serum transaminases.

Other: Anaphylaxis, angioedema (in all patients); flulike syndrome, viral infection (in children)

Montelukast and Zafirlukast should not be used for an acute asthma attack or in status asthmaticus.

The patient should be monitored for adverse reactions, such as cardiac and pulmonary symptoms, eosinophilia, and vasculitis, in patients undergoing corticosteroid withdrawal.

Also, it is recommended that you watch the patient closely for suicidal tendencies during Montelukast therapy, especially when therapy starts or dosage changes.

Caution patient with aspirin sensitivity to avoid aspirin and NSAIDs during Montelukast therapy because it may not effectively reduce bronchospasm in such a patient.

A Indicated in age only 12 and over.

Contraindicated during pregnancy and breast-feeding. Avoid its use in the patient with phenylketonuria that chewable tablet contains phenylalanine. 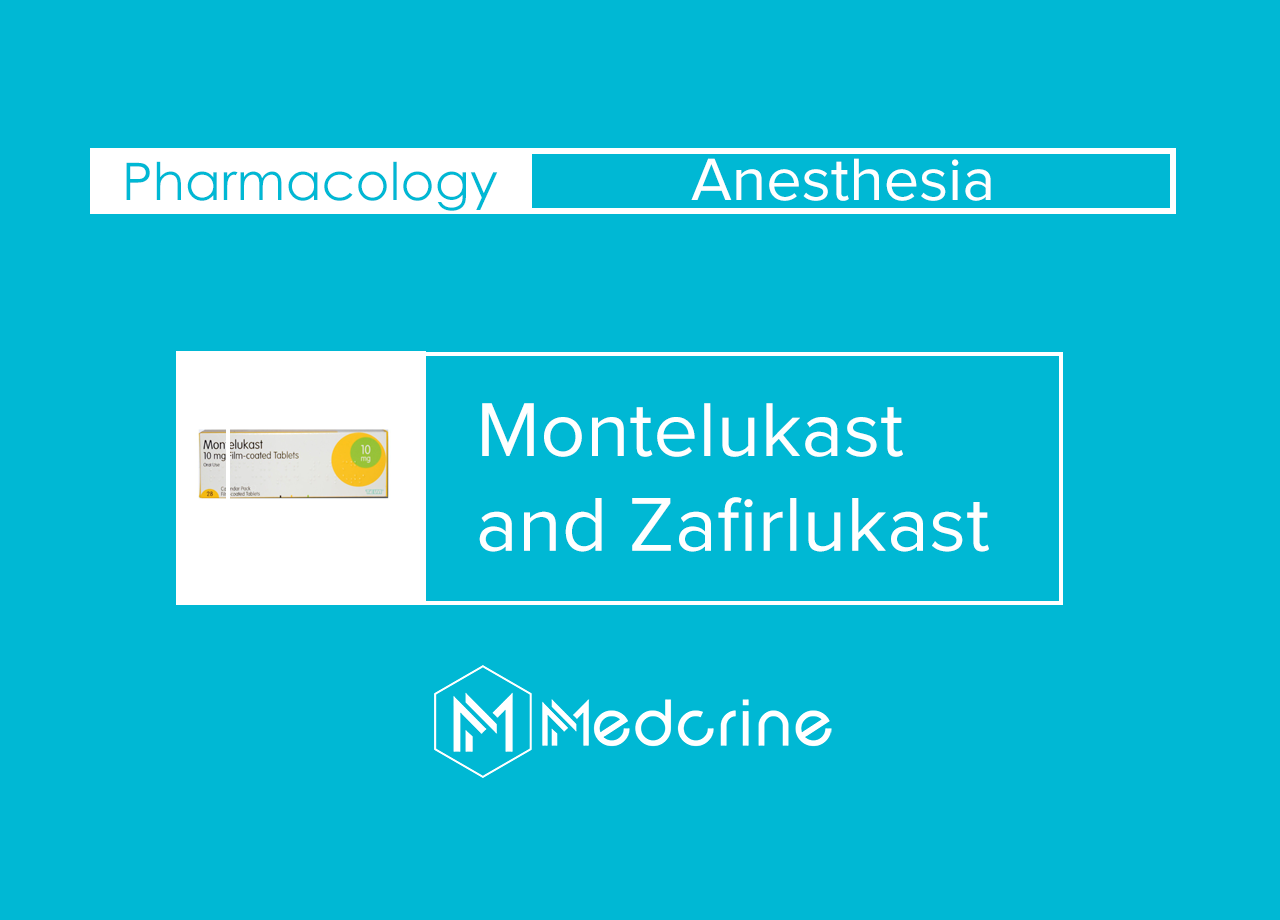