Myositis ossificans usually present with pain, tenderness, focal swelling, and joint muscle reduction, in the aftermath of a painful muscle contusion which resolved more slowly than expected, if at all.

The condition rarely is asymptomatic, and may sometimes be diagnosed from radiographs obtained for unrelated problems.

Most (ie, 80%) ossifications arise in the thigh or arm and are predisposed to by a too-early return to activity after an injury.
Other sites include intercostal spaces, erector spinae, pectoralis muscles, glutei, and the chest.

When a severe injury with hematoma is recognized, it is important to splint the extremity and avoid activity. If further trauma causes recurrent injury, ossification may reach spectacular proportions and resemble osteosarcoma.

Hazy densities are sometimes noted one month after injury, while the denser opacities eventually seen may not be apparent until two months have passed.

Treatment is initially conservative, as some patients' calcifications will spontaneously be reabsorbed, and others will have minimal symptoms.

Disability is great, with local swelling and heat and extreme pain upon the slightest motion of the adjacent joint.
The limb should be rested, with the knee in extension or the elbow in 90 degrees of flexion, until the local reaction has subsided.

After local heat and tenderness have decreased, gentle active exercises may be initiated. Passive stretching exercises are not indicated, because they may stimulate the ossification reaction.
Use of indomethacin to reduce pain and inflammatory reaction.

It is occasionally necessary to excise excessive bony tissue if it interferes with muscle function once the reaction is mature.
Surgery should not be attempted before 9 months to 1 year after injury, because it may restart the process and lead to an even more severe reaction.

An early examination may be unremarkable. Floccular calcified density is observable in soft tissues at 2-6 weeks from onset. By 6-8 weeks, calcification becomes sharply circumscribed.

Ossifications tend to adhere to the periosteum.

Myositis ossificans' calcification occurs in association with the bone's diaphysis, unlike osteogenic sarcoma, where calcification is associated with the metaphysis

Myositis ossificans occurs most commonly in the second and third decade in the arms and thighs of patients who have experienced some sort of trauma.

The quadriceps and brachialis are the most affected.
Myositis ossificans presents as a rapid enlargement and significant pain one to two weeks after injury.
The patient has swelling and warmth at the site as well as an increased ESR and serum alkaline phosphatase.

The clinical picture differs from that of osteosarcoma (which is often on the differential as the age groups are the same) as the pain from myositis ossificans decreases as time goes on where osteosarcoma pain increases.

Myositis ossificans appears on plain-film at approximately 2-4 weeks after injury. The lesion begins to calcify at the periphery and works toward the center. At less than three weeks post-trauma, bone scan demonstrates increased uptake in the area.

Osteosarcoma calcifies at the center and continues to the periphery. CT scan helps delineate a central radiolucency surrounded by a dense periphery.

Microscopically, myositis ossificans appear different at the periphery and the center. Acutely, there is a proliferation of undifferentiated mesenchymal cells that infiltrates the muscle.

At approximately 2-3 weeks, osteoid production begins at the periphery and fibrous tissue begins to form around the shell. The center of the lesion will be an irregular mass of immature fibroblasts. Moving towards the edge, there will be islands of disorganized osteoid.
At the edge of the lesion, trabeculae of lamellar and woven bone are present. There may be a cartilage component as well. This process is in contrast to osteosarcoma where the ossification begins at the center of the lesion. 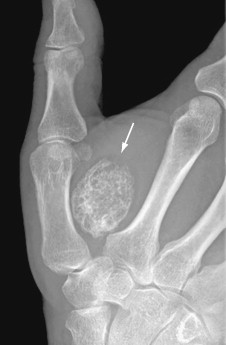