Penicillins have been in existence since its discovery by fleming in 1928. So far it is the oldest known beta-lactam antibiotics. This antibiotic has undergone various modifications to give rise to a number of broadspectrum penicillins.

For the essence of this article, we are going to break down the penicillin G and its depot forms.

What is penicillin G?

Benzylpenicillin has a is very rapidly clearance from the body. This makes it be administered in many doses per day.

Penicillin is a weak acid that is highly ionized in plasma. It has poor oral absorption due to hydrolysis.

Its presence in a depo form ensures that the drug stays in circulation for long enough.

There are two forms of depo injections of penicillin that have been developed.

Procaine is a local anesthetic that belongs to a class of amino ester groups. This drug is used to relieve pain when administering penicillin injection. Procaine is also known as Novocaine. Procaine penicillin is then slowly absorbed and hydrolyzed to benzylpenicillin.

Procaine is hydrolyzed by plasma esterase to non-toxic metabolites PABA and dimethylaminoethanol then slowly eliminated in urine.

On the other hand, benzathine is a stabilizer that is added to benzylpenicillin.

Procaine penicillin is absorbed over hours as compared to benzathine penicillin that lasts over days. These forms of penicillin are all administered through an intramuscular route.

Benzathine penicillin is another depo form of penicillin that is formed by a combination of one mole of an ammonium salt and two moles of penicillin.

Benzathine penicillin provides a penicillin serum level of 15 to 30 days but the concentration is not sufficient enough to treat conditions such as neurosyphilis due to lower concentration in cerebrospinal fluid.

Rapid kidney excretion accounts for the short half-lives of most penicillins, 90% of which is proximal tubular secretion, while the remaining 10% is due to glomerular filtration.

Penicillin G benzathine is used in the treatment of treponema infections and also in the eradication of group beta-hemolytic streptococci. Benzathine due to its combination is very insoluble (less soluble). This low solubility provides a longer duration of action as compared to procaine penicillin.

Procaine penicillin is usually once-daily dosing administered via the intramuscular route on the gluteus maximus or mid-lateral thigh.

Slow intravenous penicillin G is preferred due to the discomfort when it is administered via intramuscularly.

Procaine Penicillin G injection is indicated for strains of bacteria that cause septicemia, empyema, pneumonia, endocarditis, and pericarditis.

Benzathine penicillin, on the other hand, is indicated for the treatment of infections that are sensitive to low and prolonged serum penicillin levels such as syphilis, yaws, rheumatic fever, upper respiratory infections due to streptococci.

When probenecid is used with penicillin, this may increase the serum concentration of penicillin.

In all depots, there is an incomplete but delayed release of penicillin.

Note that a rapid intravenous administration of penicillin can cause cardiac arrhythmias. You know why? 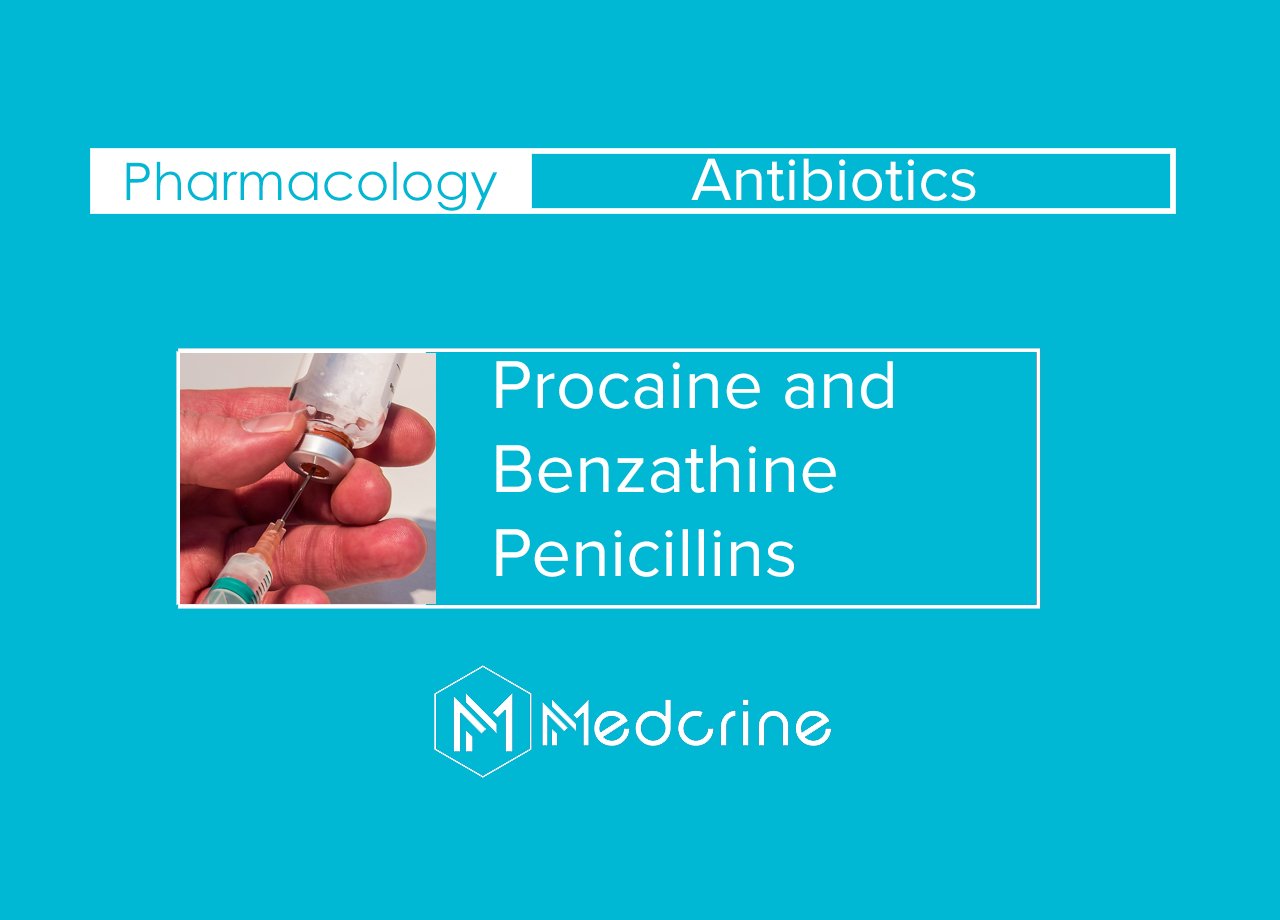